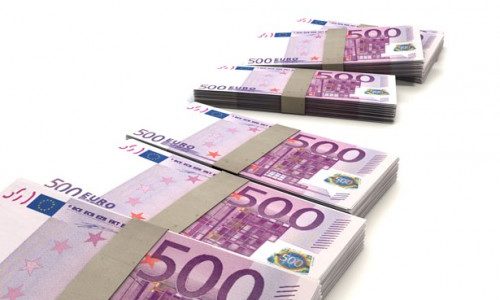 The idea of withdrawing 500 euro bill from circulation reappears in public debate every now and then. In 2010, the United Kingdom was the first to ban the sale of the note by exchange offices even though the country is not a member of the Eurozone. Now, the European Anti-Fraud Office (OLAF) calls on the European Central Bank (ECB) to reconsider withdrawing the banknote as it is a comfortable tool for mobsters to smuggle tainted money. On the other hand, there are countries like Germany or the Netherlands where the tradition of using tangible money instead of electronic one (like credit cards, cheques etc.) still prevails. So what are the main concerns that act in favor of  withdrawing the purple bill?

According to research conducted by an English public body, Serious Organized Crime Agency (SOCA), 90% of money exchanged into 500 euro bills were linked to crime, money laundering,  corruption, terrorism etc. Just to give a general idea: 1 million euros in 500-euro notes weight around 2 kilos, whereas the same amount of money in 20 euros weights around 50 kilos. With no doubt, mobsters are more willing to chose the first denomination to smuggle money across the borders. A short glimpse on the data: at the end of 2015 only 3% of money in circulation were 500-euro bills. But in this small percentage, almost 30% of the total euro-value was comprised.

After a period of remission, the topic is again in the limelight of the European Union as a result of November’s terrorist attacks in Paris. On 12 February 2016, 28 finance ministers met in Brussels to review this urging problem. Main focus was placed on establishing thresholds on cash payments. Along with that, politicians called on The European Central Bank (institution in charge of decisions in the regard of  issuing euro notes) to re-examine the necessity of high denomination banknotes in circulation, in particular the 500-euro bill.

To diminish the possibility of corruption and money laundering certain countries set cash transaction limits. For a long time Greece was the one to open the list with the lowest limit of 1,500 euros, but since September 2015 France has taken over the reign with the limit of 1,000 euros per transaction. Italy and Belgium set the limit on 3,000 euros, whereas countries like Poland and Czech Republic set the ceiling at 15,000 euros and 14,000 euros respectively. Any higher transaction must be made either via bank transfers, cheques or credit cards, so that the money flow could be easily tracked. The UK found a different solution – there is no generic limit on cash transactions, yet traders need to register themselves if they accept payments of more than 15,000 euros.

. Even though placing a limit on cash transactions seems to be a common trend, Germany is unwilling to obey by this rule. Research conducted by an American Federal Reserve show that an average German wallet consists at least twice as much tangible money as the wallet of an Aussie, American or a Frenchman. When asked why, Germans claim that using real money helps them control their spendings. However, facing recent problems Germany is considering introducing a 5,000 euro limit which might aid combatting corruption, terrorist financing and money laundering. With no doubt proposed solution will act as a hindrance as according to certain reports around 100 billion euro are laundered in Germany per year.

Apparently, the recent commotion around 500 euro note delivered the desired effect – on Monday 15 February 2016 the president of the European Central Bank (ECB) announced that discarding 500-euro banknote would be examined by ECB. This is a huge success of European community regarding the fact that the discussion has been up in the air for many years, yet it has never got the attention it deserves. But what one needs to acknowledge – withdrawing the bill from the circulation is not the ultimate remedy against illicit financial flows. That is just another obstacle that might render illegal operations more burdensome, yet without countries’ parallel accord on further actions the goal of minimizing corruption, money laundering and terrorist financing will not be achieved.

EU Directive on the freezing and confiscation – help in the fight against organized crime groups?