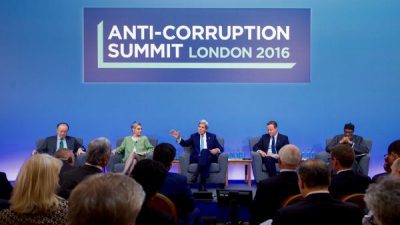 12 May 2016 London became the capital for anti-corruption activities – over 40 countries were represented at the Anti-corruption London Summit 2016. The range of participants varied from government’s appointees to non-governmental organization’s and privat business-establishments’ representatives. This year’s edition was particularly relevant due to the latest revelations divulged on Panama Papers, numerous tax evasions performed by influential companies and increased world’s tendency to fight organized crime and corruption. Germany was represented in a person of Heiko Maas, the Minister of Justice in Angela Merkel’s cabinet. One-day long meeting did not bring  breakthrough promises from the side of German authorities. Nevertheless, it enabled the countries’ dialogue and certain commitments were made, wich might act as an incentive for other states to take steps in the fight against corruption.

The most significant outcome deals with business transparency and considers six countries – Britain, Afghanistan, Kenya, France, the Netherlands and Nigeria – which have committed to publishing registers of the real companies’ owners (beneficial owners), which is a milestone in the XXIst century common politics of secrecy. Six more states will consider implementing such a change in their national law. What cannot be overlooked is the fact that eleven countries (including very well known tax havens like Cayman Islands, Jersey, Bermuda, The Isley of Man) have undertaken the task of sharing beneficial ownership lists between governments, although not publicly.

Germany did not take on any specific undertakings, although Heiko Mass did say that the country would do its utmost to fight the corruption’s phenomenon as effectively as possible. Also he promised to introduce tougher sanctions against criminal activities: ”Companies and banks must bear more responsibility. Sanctions must be greater and more effective. So far, the insurmountable fine’s limit is ten million euros. We need more flexible limits, that is: Amounts due must be calculated according to the company’s turnover or profit.” What is more, Germany commits to strengthening and streamlining its legislation on seizure and confiscation of ill-gotten gains including proceeds of corruption, which is in line with the European Union’s priorities for the fight against serious and organized crime between 2014 and 2017. Other promises include fighting bribery in the health care, improving transparency and openness in public procurement procedures, broadening the criminalization of doping in sports, implementing FATF standards (internationally endorsed global standards against money laundering and terrorist financing) to name a few.

According to the International Monetary Fund (which also took part in the summit) 1,3 billion euro to 1,75 billion euro are absorbed by corruption activities worldwide every year which undermines the global Economy by 2%. What is more, it was stated that corruption is as bad as terrorism – a statement that cannot be refuted especially that the terrorism most likely is to be funded by black market money (which may also encompass corruption money). That is why, more transparency in the financial domain would help a bigger cause – facilitation of the fight against terrorism. The German stand towards the exposure of beneficiary owners is somewhere in the middle: current law determines that the beneficiary owner must be mentioned in the register that only official body can access, yet many promising commitments were made by Heiko Maas.

BitCrime project reveals the use of digital currency in organised crime