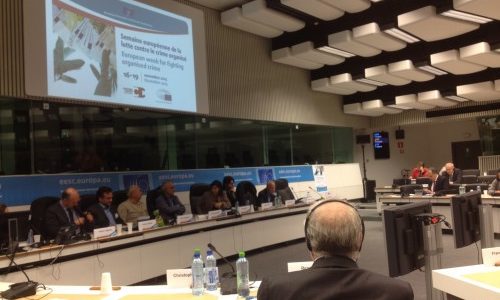 The European Commission is developing into a major player on the fight against mafia and organized crime in Europe. Brussels’ directives made their mark against money laundering. Also final report of CRIM Committee on European organized crime added fuel to the fire. Now, the European Parliament puts in the limelight this problematic matter. As a result of recent increase of interest in this topic, in November 2015 in, under the auspices of the European Parliament „European Week for the fight against organized crime” took place. Our partner organization Cultura Contro Camorra was among the organizers and Mafia? Nein, danke! e.V. was represented by several delegates. Here is a detailed report on the event.

The Conference on 18.11.2015 was organized jointly by the non-governmental organization Cultura control Camorra and European Commission as part of the European Week for fighting organized crime. Organized crime revolves no longer only around drug smuggling or mafioso’s groups asking restaurants for protection money. It is a larger area comprising cyber crimes, medicine counterfeit, human trafficking, public procurement and many more. Usually, all of the activities are intertwined, which makes organized crime groups similar to big companies with multiple branches.

A panel with an umbrella title „Magnitude and revenues of selected illicit markets. The investments of organized crime across Europe” was the most informative and precisely covered. Liesbeth Vandal from European Monitoring Centre for Drugs and Drug Addiction was the first panelist. She gave a cross-section of drug use around Europe. Cannabis is still the most used narcotic, and 80% of drug related seizures are connected to cannabis smuggling. Declining tendency was noticed in production of heroine and other opioids in Europe, which links to Turkey’s increasing production of it. Those kind of studies are a great source for Europol as they facilitate distinction of a territory with increased activity of organized crime groups judging by the the augmentation of drug usage. David Shore from Pfizer explored the topic of counterfeit medicine production. People that produce these, are usually already linked with the production of drugs as they might be in possession of indispensable equipment for the production process. Up to 50 000 counterfeit tablets may be made per month one-handedly. Despite the fact, that the scope of the problem is tremendous, legal system pretends not to see the span of it. In most national law systems the drug prevention and drug-related crimes get the attention deserved, nfl jerseys 2017 online 2 but there are no paragraphs for punishing counterfeit medicine producers and distributors. And that is a major negligence as this area brings colossal profits to organized crime groups. And money earn on black market will be most likely funneled to a different black market activity like terrorism.

Great deal of practical guidelines was given by Gherardo Colombo, a former judge of Mani pulite and Premio Nazionale Cultura della Pace. He draw attention to the definition of corruption per se.  His statement was clear: corruption will always be linked to organized crime. Italian legal definition do not perceive as corruption transmission of money between privates. One may ask what if this private company has big impact on the public sector for example in terms of public procurement. And this question was approached by Brigitte Unger, a professor from University of Utrecht. She prepared a study in the domain of public procurement to extract „corruption indicators” that should raise suspicion of authorities. The contact office not subordinated to tender provider, the time for bidding process was shortened, tender includes „packages”, there is a substantial change in project scope/costs after having been awarded with it and there is large amount of missing information about the bidder – those are one of the main factors that should attract authorities’ attention and entail further investigation. Such tenders should be scrutinized more thoroughly in order to rule out any kind of illegal conduct of the parties included.

As a summary, it is worth noticing that in April 2014 European Commission adopted an agenda recognizing 3 main priority areas for 6 years. One of them is fighting organized crime and that entails that anti-corruption and anti-money laundering laws need to be revised as they are „oil-in-the-wheel” in organized crime activities. That is why, on 3rd of April 2014 European Parliament issued a directive on the freezing and confiscation of instrumentalities and proceeds of crime in the European Union, which needs to be transposed into national laws of Member States until 4 October 2016. Also effectivity of confiscation calls for improvement, but to achieve amelioration in this field, first the whole tracking process of deeds and mobsters needs to be upgraded. The conference gave the possibility for theoreticians and practitioners to meet and discuss one of the most urging problem of today’s world, because it is money from organized crime that sponsors various illegal activities – and that is why this vicious circle needs to be broken.

Unlikely two previous ones, the conference on 19.11.2015 was open to public and it took place in the premises of European Parliament. The core topic of Thursday’s seminar was „The exploitation of human beings by organized crime”.

First on the stand was Geneviève Colas from Secours Catholique – Caritas France and Collectif. To fight the problem, first two main definitions must be explained: first is human trafficking – trade and exploitation of a person for different reasons (sexual, forced labour etc.) and second is people smuggling, which is facilitating the transportation of a person across an international border in violation of countries’ laws. The latter can remold into the former one. It is essential not to forget the links between these kind of human rights’ violations with organized crime groups activities. It is organized  crime groups that offer an alleged help to people while in reality they fulfill their illegal plan which enables them to gain money, that most likely will be used in sponsoring another illegal activity.

The most interesting speech was given by Raffaele Piccirillo, General Director from Penal Affairs at the Italian Ministry of Justice. He presented figures from his personal experience of a 20-year judge career in Naples and recent Ministry of Justice data. As an improvement to European Unions’ standards, Italy created 3 different articles in their Penal Code to better distinguish types of human rights’ violation: slavery, human trafficking and people smuggling. According to data from  Italian Ministry of Justice (September 2015) 70% of accused were convicted in the first instance. Unsurprisingly, 75% of victims are women in which 51% are Romanian, 19% Nigerian and 15% are minors that came to Italy with parents or alone but with parents’ consent. 25% of victims are men that do not have prospects for job finding. After the recruitment process usually there is violence involved in maintaining loyalty of recruits. One may ask, why a person decides voluntarily on such conditions. That is the trick – organized crime groups almost never exercise violence while luring rookies. 50% of legal proceedings are initiated by the victims’ denunciation. Seems not a lot, but that is where the shoe pinches – some of the jurisdictions hold the victim also as a part of illegal plot, which means that the victim can be the violator at the same time. (sic!)

Presentations of Klaus Meyer-Capri from Eurojust and Carlo van Heuckelom from Europol allowed to understand the connections between those two important European bodies. Eurojust is a body that was established to ease the dialogue between all parties involved in the prejudicial and judicial proceedings: police, investigators, public prosecutors etc. and to coordinate those kind of meetings. It is still falsely believed that Europol is the „FBI of European Union” whereas it has absolutely no investigative powers. It facilitates the exchange of information between Member States and also can furnish adequate forces with trainings. They also issue recommendations of how to fight agains human trafficking. From what was presented, the most effective and easy to apply proposal seems to be the one that is based on exploitation of Financial Intelligence – gathering the information about financial affairs to predict intentions. The Netherlands are the example – it was spotted that from a certain part of their country similar bank transfers were being made by objectively comparable profiles of persons: women, 18-28 years old, baltic countries’ nationality. And thanks to that findings, it was possible to find a territory where organized crime groups were exercising their sexual assault business.

Although not as intensive as previous days, the conference on 19.11.2015 was a perfect end to European Week for Fighting organized crime. It shed more light on the problem and draw connections between organized crime groups and human trafficking in European Union. Also, vast majority of speakers were practitioners that is why they explained not only the current situation but also they already had answers prepared of how we – society and the authorities can help to mitigate the spread of this type of activities and to help individuals that were already afflicted by these wrongdoings. It is essential that a state watches over the transposition of European directives into the national laws. Also it is advisable that good practices of legislation from foreign countries are being recognized in different states. From civil point of view it is important to institute network that would be bigger than the mafia network and to sensibilise society about the human trafficking problem.