mafianeindanke in the European Parliament 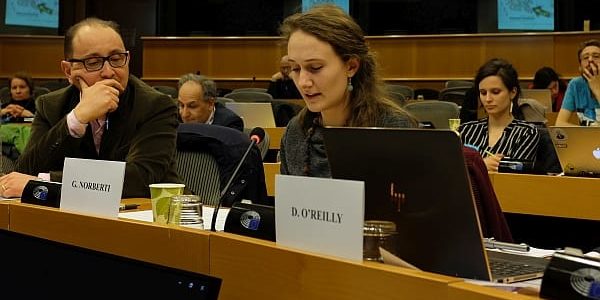 It was almost 12 years ago, when the first mafianeindanke activists in Berlin laid the foundations of our association. The situation back then was very complicated. There had been 6 mafia-members shot in front of a pizzeria in the city of Duisburg. And in Berlin, shortly after, more than 50 restaurant owners got a letter asking for protection money and some got their cars and restaurants set afire in the city. There was a lot to be worried about.
We stood united and, cooperating with the police, we managed to get the criminals arrested.
We were dreaming of waking up Germany.
Today, after 12 years, there are evidence showing that we didn’t make that dream come true (yet). Germany, in fact, scores an unbelievable 7th position in the world Financial Secrecy Index and it is a paradise for money launderers and their dirty capitals.
But our steady commitment brought also encouraging results. Our work was also facilitated by the inputs coming from the EU. For example, 5 years ago, thanks to an international European-funded research project, we organised a conference in Berlin for the promotion of confiscation measures in Europe
(maybe you, dear mister Tinè, might remember it).
Two years ago the new confiscation law – fostered by the EU-Directive – was presented by the German interior minister at another conference we organised – and last year we proudly witnessed a public prosecutor in Berlin fighting for the confiscation of criminal assets – seizing 77 properties and strongly promoting the new law. And she was our guest 5 years ago. You see, working together is key for success.
But what else does civil society need to be more effective in this fight?
Money, of course ?
We need to better know and study the phenomena of organised crime and mafias because we observe a dramatic lack of knowledge and awareness at all levels. In order to improve the production and dissemination of information, we would like to implement a European network of observatories, with the task of monitoring and studying the local and international criminal dynamics. These observatories would the place to develop and exchange new best practices. Criminal phenomena are in continuous transformation, adapting themselves to the evolving societies. Therefore, also the contrasting tools and methods have to be adjusted and new ones have to be conceived. For example, we are currently conducting in Berlin a feasibility analysis for supporting people in the dissociation from their criminal background.
In order to improve the effectiveness, we also need – as underlined by my CHANCE fellows – the harmonisation of the national laws in many areas.
We would like to point out for example the problems related to the lack of international coordination in the protection of witnesses and whistle blowers with a simple story:
in Germany lives an Italian woman, who through family relations got involved in the international traffics of an Italian-mafia network. When she realised that this business would put in danger herself and her kids, she decided to become a witness and spoke with the German police. Her declarations became key accusations in an Italian investigation, which led to one of the main recent operations against Italian mafia in Europe and to the arrest of dozens relevant members of mafia families. Despite this, she was not accepted in the German protection program. From a German point of view, the disclosed information was not sufficiently relevant – as there is no law punishing the belonging to a mafia group in Germany. This illustrative case shows how important is the European homogenisation of the protection programs for witnesses. It would also be essential to create mechanisms for the acquisition and exchange of information coming from witnesses, whistle blowers and informants, who often have a key role in unveiling organised crime and mafia structures.
In conclusion, I must say that I am very proud and thankful for the path we have built together with the CHANCE network. We believe that the variety of problems and the different contributions today highlighted that organised crime and mafias are phenomena affecting society as a whole.
We believe that the engagement of civil society has to play a key role.
It is a European problem, we need a European action and reaction.
I am sure that next time we will meet here we will be more – more people, more organisations, from all over Europe – with more tools and new methods.
Thank you very much.