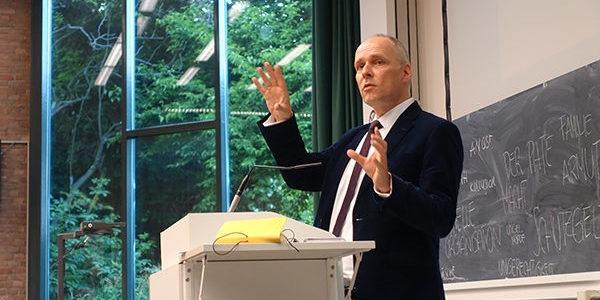 Universities and institutes are empty, TVs, newspapers and social media only talk about one topic: COVID-19. The fact that meetings and events are currently limited does not stop a renowned professor at the University of Cologne from talking to his students. This is not the first time that Prof. Dr. Frank Neubacher M.A. has encountered obstacles in the research topic “organised crime”. The holder of the Chair of Criminology and Criminal Law and Director of the Institute of Criminology answered in writing form to the questions raised by mafianeindanke and provided new insights into the challenges he encountered during his research on “Mafia in Germany”.

mafianeindanke: In your essay “Mafia und Kriminologie in Deutschland” (Mafia and criminology in Germany), published in 2014, you write: “I have never understood why German criminology – in contrast to other countries – is so insistently silent on the subject of the Mafia and why it leaves the phenomenon […] to loquacious journalists and secretive detectives”. Has your opinion changed?

Prof. Dr. Frank Neubacher: This is still my opinion, because the situation has not changed. My essay was supposed to be a wake-up call, but it remained unanswered. As a scientist you must practice self-criticism – on the research itself – when such “blind spots” appear. Science simply lacks a very important voice in the public discourse.

MND: Is the search for material on organised crime (OC) and especially on Mafia in Germany successful? Are the authorities, in particular the Bundeskriminalamt (Federal Criminal Police Office), helpful or open to collaborations when it comes to the release of information?

F.N: The authorities give their usual publications, especially the annual report “Organized Crime” of the BKA. This document contains the most important key data on the proceedings the BKA is currently dealing with on an average of 70 pages. Italian OC groups make up only a small part of the material. Moreover, it only deals with those cases that have become known. When talking about Mafia it’s important to discover what lays underneath the surface, hidden from the authorities. Material that the police have prepared for the public – as in the case of the annual reports – is gladly published and it is freely available to everyone on the Internet. Beyond that, however, the BKA is very reticent, especially when it comes to Mafia or, as the office says, “serious organised crime”. They are not willing to open up concerning these topics. That is why it is so difficult to judge how well the police are positioned in the fight against crime. And maybe that’s one reason for their discretion.

MND: Have you ever had a negative experience or – better said – has your research ever stumbled because the flow of information was restricted?

F.N: In 2008, on the first anniversary of the Duisburg Massacre, the press quoted from a secret BKA report that had been “leaked”. Consequently, I asked the president of the BKA access to said document for scientific purposes. I even repeated this request, but in vain. Although parts of the report had already been circulating to the public, the BKA insisted on privacy and, in my opinion, wasted a good opportunity to cooperate with the scientific community.

MND: Is it necessary to demand financial aid from the state for academic work, especially on Mafia in Germany?

F.N: State funding for the promotion of science is in principle a good thing if science itself can decide on the distribution of these funds and thus also on the topics of research. After all, we already have such a system with the “Deutsche Forschungsgemeinschaft” (German Researchers Foundation DFG). When it comes to the issue of the mafia, however, I do not believe that money is the problem, but – as we say in science – the “access to the field” is the real issue. How do I find direct access to the phenomenon? Are participating observations conceivable? Probably not, because the practical and ethical problems are obvious! And how do I approach interview partners or a subject who’s been interrogated for example about protection against racketing? How can I know the reasons why potential interviewee participate or do not participate? How reliable is such information? And am I possibly putting someone in danger?

MND: As a criminologist, why did you feel that the topic of mafia was important in Germany and why did you decide to deal with it?

F.N: 2007’s Duisburg Massacre was a turning point. After that, the question was there for everyone to see: why aren’t we dealing with the issue? My interest for the topic has its roots in the 90s and it has to do first of all with the fact that I have always felt connected to Italy and simply wanted to understand what mafia is. Before the internet changed all our lives (not for the worse!), I brought books from Italy, whatever I could get. I understood then that I was reporting in Germany about what was going on in Italy. In 2006, for example, I wrote a review of the book “Gomorra” by Roberto Saviano for a German journal, when the book was not yet available in the German translation. The significance and impact of this work was immediately clear to me.

MND: Do you think that people are by nature easily susceptible to Mafia influences?

F.N: This is a difficult question, which, because of my uncertainty and because it exceeds my scientific expertise, I will only answer briefly. Humans are in principle capable of the highest and the lowest. But yes, some are vulnerable because they want to take the easy way – not questioning anything and following an “authority”. Ultimately, corruption starts on a small scale. We can see it in our own behaviour when we agree to break our principles for a small advantage. The worst part is that we convince ourselves it is the right thing to do.

F.N: Not that I know of! In 2003 I travelled to Sicily. The Mafia seemed very close to me there, especially in Palermo. On the local radio you could hear, for example in the bar in the morning, news of shootings, arrests, investigations. But at the same time, I knew that the situation must have been worse 10, 20 years before. Besides, the anti-mafia movement was much more visible. And in many situations, I was just a tourist and so taken by the beauty of the island and the people there that I didn’t even think about the Mafia.

MND: You deal with mafia and OC in your lectures. What feedback do you receive from your students? Do they show interest, or do they perceive it as a “foreign problem”?

F.N: The students are very curious and ask a lot of questions, and that is good, because curiosity is the beginning of all kind of science. More than with other topics, however, where students are eager to discuss, they are more reticent to express their opinions on Mafia. My impression is that they feel that their “knowledge” comes mainly from movies about the topic and that this has little to do with the current reality.

MND: Through university involvement, attention can be drawn to the mafia and its methods. How important is this work on raising the awareness at universities? Do you think that it would be necessary in Germany to establish a kind of monitoring centre like the one created by Prof. Nando dalla Chiesa at the University of Milan?

F.N: I think that universities in general are very important. In my opinion, they are of extreme importance for the personal development of students – you can notice that I deliberately did not speak of them only as an educational institution. At the university, everything can and should be talked about – including, but not only, Mafia. A monitoring centre is an attractive idea. Yes, why not? The awareness-raising work could be done there, one could have a wide library on the topic, and the different actors – journalists, scientists, prosecutors – could also be brought together there.

MND: Were or are you alone in the research about Mafia in Germany?

F.N: Please do not overestimate me. I’m not completely alone and I’m mostly involved with organized crime as a side of my job. My main field of work as a scientist is prison research. But as the saying goes, “In the land of the blind, the one-eyed man is king”.

MND: How much does academic work influence current political developments?

F.N: When it comes to the topic of Mafia, this influence does not exist because the corresponding academic work does not exist. Otherwise the influence of criminology on crime policy is weak to non-existent. It is a misbelief to think that politics does what science recommends (assuming science agrees at all). In the current Corona crisis, science is being listened to more strongly again. This is encouraging and hopefully belongs to those things that will remain in the post-Corona era.

MND: On a scale from 1 (“not prepared at all”) to 10 (“totally prepared”), how prepared would you classify the legal system in Germany for the Mafia? Is Germany a fertile land for mafiosi?

F.N: One can never be too careful – hence a 7. From the reports of the BKA it can be seen that cases in which organised crime has influenced or tried to influence the police, public administration or the judiciary are rare. A very important issue, not only about Mafia, is the fight against money laundering. But here, as elsewhere, the same applies: laws are not everything, they have to be enforced, and for this a sufficient number of well-trained experts are needed.

MND: If you had all the material at your disposal and if there were no obstacles of any kind, on which essay or book would you start working on?

Actually, I would like to write a book about the Mafia. But it would have to meet scientific criteria and at the same time be interesting and easy to read for a wider public. About 10 years ago I was close to it, but then I stopped working on such a book. I just didn’t feel comfortable with it, because although I surveyed all the literature, I didn’t have my own empirical approach (such as through special data, interviews or file material). Who knows, maybe one day.

F.N: This question embarrasses me. I could name a few books about Italy, but I can’t think of any for Germany. Wouldn’t that be a nice dissertation topic for you?

Why ‘ndrangheta is a problem for Germany as well