Filippo Spiezia: ”The European Commission wants to cut Eurojust’s operational budget. It is unacceptable and against the EU values” 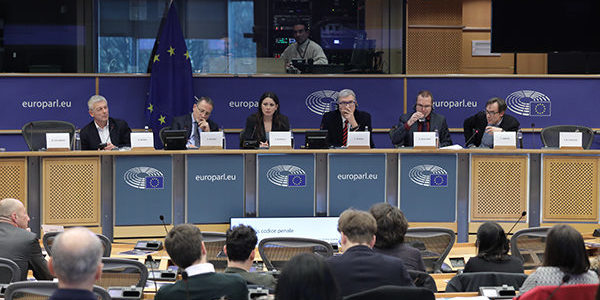 The vice-president of Eurojust speaks at the conference ”Mafias: a European Problem”, organised at the European Parliament. Brussels, 5 February 2020.

On the 5th of February 2020 the conference ”Mafias: a European Problem” was held in Brussels at the European Parliament, promoted by the MEP Sabrina Pignedoli which saw, among the speakers, the vice-president of Eurojust Filippo Spiezia. His speech gave to the participants some food for thought that is worth reviewing.

At the beginning, Filippo Spiezia recalled the investigative operation Pollino, also known as “European ‘ndrangheta Connection”, which led to the arrest of 90 people in 2018 and produced one of the most effective judicial responses on a European level against mafia organisations. In particular, he praised the work of his German colleague Uwe Mühlhoff, Duisburg’s Public Prosecutor (here his remarks). Mr. Spiezia spoke about the important professional experience he and Mr Mühlhoff have undertaken together, praising his commitment and courage, which resulted in an operational axis between Italy and Germany of fundamental importance.

The vice-president of Eurojust has presented a preview of data that are the result of the work of the agency for the year 2019, stressing the importance of doing it in the European Parliament, where he can directly address the political power. Spiezia, in fact, argues that it is necessary to find new solutions to fight the mafias in Europe in the context of a renewed strategy. In its analysis a valid starting point remains ”the new EU strategy for the new millennium against organized crime” of May 2000 (C:2000:124:TOC), which presents an extraordinary topicality and effectiveness, as well as some important programmatic points that have not yet been implemented. It is therefore necessary to start again from this document, which contained important milestones in the fight against organised crime, and to evaluate the necessary additions.

But what do we mean when we talk about organised crime and mafia? At the moment, Spiezia specifies, we do not have a legally shared definition of organized crime, nor do we have an internationally valid legal definition of the concept of mafias. It is true, the Palermo Convention of 2000, Art. 2(a) defines the organized criminal group: ‘’structured group of three or more persons, existing for a period of time and acting in concert with the aim of committing one or more serious crimes or offences […] in order to obtain, directly or indirectly, a financial or other material benefit’’. But this is a concept more a matter of doctrine than of legal definition. The mafia-type association, instead, is a crime provided for by the Italian legislator through the Rognoni-La Torre law (art.416-bis of the Penal Code) of 1982 and responds to a precise connotation.

On the practical level, the major difference is given by the stability of the criminal project: the mafias are characterized by their vocation to exercise a form of anti-state within the territories and social communities, due to the force of intimidation (which is a normative parameter of 416-bis). Here lies the root of the problem: the vocation of the mafia organizations to carry out a stable criminal project over time. This has made it possible for the mafia organizations to evolve, starting from their territories of origin, to reach other regions of Italy and abroad.

Spiezia then analyses the Eurojust data and points out that the Agency’s action has increased in recent years. Between 2018 and 2019 Eurojust increased its operations by 17%, providing support in as many as 8000 investigations into transnational crime (2019).

Observing the judicial data of the body, however, it is noted that mafia-type organized crime is not considered in the priority areas of action of the European Union. It is undoubtedly present in the judicial data of Eurojust but is not formally classified among the priority areas because it does not fall within the classification parameters considered in the official documents of the Union. Paradoxically, therefore, the mafia phenomenon is not considered a priority. For what reason?

First of all, there is a problem of classification with regard to the presence of mafia-type organisations outside their territories of origin. The Italian Court of Cassation provides two different frameworks, apparently in contrast. The first orientation requires the ”proof that that organization had the capacity to exercise mafia control over the new territory of development. The other orientation maintains that it is not necessary to prove the projection of mafia intimidation on the new territory if there is the evident connection with the motherland”. To resolve the interpretative conflict, on July 17, 2019, the President of the Supreme Court of Cassation expressed his opinion on the matter, arguing that the problem concerned only the ”proof of the mafia method”. For the newly created mafias, which constitute themselves outside of their original centres, it is necessary that the new cell can manifest itself and express itself as a mafia cell, therefore, the projection of the mafia must be found on the territory. On the contrary, for the aggregates which are the manifestation of cells already existing in the motherland, there is no need to go and prove that on the territory of arrival there is a new mafia cell.

See, for example, Operation Pollino: for the mafiosi who go to Duisburg – or, more generally, for business in Germany and Holland – there is no need to prove that a new mafia cell has formed. It is sufficient to know that the mafia subject active in Duisburg belongs to a mafia-type criminal organization – the ‘ndrangheta – which is already proven to exist in Calabria.

There is, then, a problem of emergence of the phenomenon at a European level. This, according to Spiezia, depends, first, on the approach of the mafia operating abroad. These are always more silent, oriented towards business and the acquisition of markets. They often do not reproduce abroad those forms of intimidation and violence that they use in their original context. They bring, instead, “a more expendable face”. Therefore, it is difficult to perceive them, unless there is a contrast with other criminal groups active on the territory which lead to situations where – see the case of Duisburg – the mafias show their violent face again, because control and hegemony on the territory is once again at stake.

The emergence of the phenomenon, then, is blocked also by the lacks and inhomogeneity of the legal framework at European level. Today, a regulatory framework – the 2008 Council Framework Decision on the fight against organised crime (QD 2008/841/JHA) – is used, which is totally inadequate. It is necessary to have legislation that reflects the business model of these criminal organisations, which reflects how organised criminal groups operate in Europe today. It is essential to consider their transnational character. Today, the magistrate strongly emphasises, there is a need for relevant legislation at European level which takes this transnationality into account and which, on this basis, makes it possible to aggravate the punitive treatment. This is a legal vacuum that needs to be filled, as does the gap concerning collaborators of justice. The Deputy Director of Eurojust points out that often there is recourse to creative solutions because there are not the appropriate instruments to carry out the work effectively. Then there is certainly a need for a European and centralised management body for assets seized and confiscated from mafias. According to EU data, only 1% of the proceeds are taken away from organised crime. If we want to win the fight against the mafias, this is a trend which must be reversed.

The most heated and heartfelt reflection, however, concerns Eurojust’s working conditions. The valuable work of the European Judicial Coordination Agency is under threat due to major budget cuts. In this respect, Mr. Spiezia launches a serious warning to the European institutions: ‘’Beware of undermining the operational capacity of the coordinating body against mafia organisations (Eurojust n.d.r.). We are fighting the problem of the multi-financial framework. Do you know what it is? It is the budget limits that are set to determine the budget allocations for the following years. We have an operational budget for Eurojust which for this year is EUR 41 million. The European Commission proposal for the coming years is EUR 33 million. This means that, according to the European Commission’s forecasts, we now close the gates. This is called the ‘shutdown’ effect, which I cannot accept as a magistrate and as a representative of the institutions. The fact that the representatives of the Commission – who are sitting in the College of Eurojust for the first time – support this proposal is not respectful of the values on which the European institution is founded”.

The Italian magistrate therefore reaffirms the need to strengthen judicial coordination at European level and the action of Eurojust. He criticises the anomalous choices made by the European institutions in the allocation of resources. He takes the example of other law-enforcement agencies that are perhaps disproportionately strengthened, such as Frontex, which will be strengthened by recruiting 10000 people over the next few years, with the aim of creating an operational coastguard and no longer just supporting the Member States. It also highlights the inevitable complexity of the European bureaucratic machine, where there is a problem regarding the transmission of information. As far as Eurojust is concerned, Spiezia recalls that when the EU Justice Commissioner found out about the agency’s difficult economic and financial situation, he did not know what they were talking about. Aware of the facts, instead, it was another section of the EU (DG HOME). The EU therefore needs to review its priorities, eliminating dysfunctions and strengthening its actions. It is not enough to just allocate expertise, it is also necessary to provide adequate support and resources. Therefore – through the introduction of new instruments, the strengthening of operational structures and the revision of the regulatory framework – the fight against mafia-type organised crime must be included among the EU’s priorities in the light of a new strategy.

At the end of the conference, Mr Spiezia expressed the hope that the political authorities present will take on board the needs and requests presented by the rapporteurs in order to promote an initiative that will gather consensus and lead to a proposal for a directive for new European legislation on organised crime.

“The war between Montenegrin clans does not stop”. The case of Igor K. shakes German public opinion