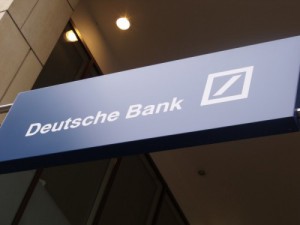 Recent years have been no sunshine and rainbows for Deutsche Bank – one of the most powerful worldwide-known institution. Next week, the bank will announce a record loss, the highest in its history: 6,7 bln euros. That downturn is surely correlated to many dubious deals executed by the bank in the past years for which it will be answerable now. But in this story, the most staggering is that, apparently, intricate criminal-like structures can grow only if equipped with the jurisdiction’s, tax advisors’ and – indeed – financial institutions’ support. Thanks to such a team, bank’s operations   are susceptible to oscillate in the grey area, jurisdictional void, simply toying with rules and regulations.

In May 2015, „Manager Magazin” wrote that the bank was suspected of having assisted Russian clients in performing transactions that would lead to money laundering. The overall sum of deals in question amounts to 6 million dollars. And as if it wasn’t enough, certain of those transactions are believed to be executed for exalted Russian politicians on which the international forum had imposed individual financial sanctions after 2014 Russian annexation of Crimea (which have been extended until first trimester of 2016). But this affair is just a tip of an iceberg of Deutsche Bank’s problems.

Deutsche Bank is a well-know investment bank, second large on the market of investments banks all around the world (in the rank slightly after Industrial and Commercial Bank of China) and 10th   biggest bank in the world in terms of assets. Established in 1870, the bank aimed to be specialized in international trade. Starting from 1995, Deutsche Bank has shifted its main focus to the domain of investment banking. In 2005, 75% of the bank’s income came from aforementioned activity sector. With numerous awards in the field of finance, it is interesting to examine last bank’s operations that ultimately, may contribute to its bad reputation.

In April 2015, Deutsche Bank was officially held responsible for manipulating the London Inter-Bank Offered Rate (LIBOR). As a result, it was ordered to pay 2,5 bln US dollars settlement money to United States and British regulators. In return, the bank would not lose its banking license in above mentioned countries and would not be legally prosecuted. This case never made major headlines although it is the most serious example of collusion inside the whole banking sector in the history of the world. So a quick glance on what LIBOR really is. Every morning certain banks submit the rate on which they are willing to lend money to their peer banks. That means that this indicators show the confidence that banks hold towards each other. It is in the bank’s interest that the interest rates on those kind of transactions are not too high – a low LIBOR rate is seen as a proof that the bank is more sound. As an example – Lehman Brothers did go under because,  ultimately, no one would lend to them. But this does not mean that LIBOR benchmark has no impact on normal commercial banking sector – trillions of financial contracts rest on it (loans’ and mortgages’ charges or derivatives to name but a few). Thus, LIBOR was being set in a way which made derivatives and loans more profitable for bank industry. This means that those banks were in charge of the basis instrument and at the same time of the floating taxation rate on the underlying transaction. Morally doubtful, those operations could and did distort the market equilibrium. First to be caught for colluding on the LIBOR rate was Barclays Bank, but it is Deutsche Bank that was punished with the highest „fine”.

To fully comprehend the scale of the problem, it is essential to understand what activities investment banks perform. Essentially, their main role is to invest money with hope of future return on the investment. To do that they use mainly swaps – derivatives that are based and dependent on the basic instrument. Long story short: pick something of value, make bets on the future value of „something” and add a contract. It resembles casino bets except it is legal to perform for banking industry. If you bet that in 2 years’ time gold would cost $1000 per ounce and you would be mistaken in your assumption – let’s say ounce in two years’ time would cost 700 dollars, you would lose 300 dollars. But if ounce cost 1300 dollars, you would earn 300 dollars. Note that you never actually get to buy the product of your bet. In banking, this bet is usually made on another bank’s related indicator – like value of stock market index or government bonds’ rentability. And that brings us to another Deutsche Bank’s problem – because the bank had made derivatives inter alia on Greek’s government bonds’ rentability, the fact that Greece was not able to repay first tranche of its debts to International Monetary Fund exerted an enormous impact on Deutsche Bank’s financial liquidity. What is more, Deutsche Bank also bought Greek government bonds, but this is just a tiny part of what it allocated in greek-related market of derivatives.

On top of already described Deutsche Banks’ problems, the latest bank-related revelation arouse over money laundering accusation. Money laundering is a process by which legal funds are made to appear legitimate using a 3-step process to achieve this: placing money in question into the financial system, layering it through a series of transactions to cover its initial source and integrating the „clean funds” into the legitimate economy. What is absolutely staggering is that according to Andreas Frank, money laundering expert, less than 1% of illegally acquired money is confiscated worldwide. There is no final decision on that matter rendered yet but findings show that the biggest German bank might not only be liable for breaking the law for 4 years (2011-2015) by laundering money for its clients but also it might be responsible for breaching international sanctions against Russian high figures. It is worth mentioning, that Deutsche Bank is already facing to pay more than 200 million dollars in penalties to department of New York state government and Federal Reserve because of having violated the United States sanctions against countries like Iran and Syria and having laundered money using their American subsidiary for those countries’ clients.

As from what is known in the Russian money laundering affair, Deutsche Bank was to perform „mirror transactions” which are carried out simultaneously on two different markets. That allows to siphon money with no obligation to inform the market controllers (no cross-border money transfer procedures apply). As a result shares of one company are being traded on two different markets at the same time. To make it happen, interested party has to find an intermediary that would agree to carry out this operation – in our story this agent is Deutsche Bank. The Russian clients are believed to have bought certain stocks in rubles and the agent to have bought actions of the same company in dollars in London. What was to be done next, was to exchange the stocks with the intermediary. Then the agent would sell Russian stocks as his own in Moscow and he would cash out the ones bought in London – that is how the Russian client would get fresh and laundered money in a different country and in different currency. The only thing that plays in favor of Deutsche Bank as a whole, is that it was the bank itself that informed German Federal Financial Supervisory Authority (BAFIN) that it had suspicions of having committed a financial crime by its Russian subsidiary. In the investigation, multiple international actors are involved: German and Russian financial supervision institutions, British Financial Service Authority and (surprisingly) the US Justice Department as a currency of US dollar was involved in aforementioned transactions. If it wasn’t enough, the Russian party accuses the bank of helping to funnel Russian capital abroad. Having so many parties involved into this investigation, the case is susceptible to be overstretched in time and the more time lapses the easier to bury evidence of committed crime.

Last but not least, Deutsche Bank is still suspected of participating in other shady business affairs, so-called „VAT-carousel frauds”, which may cost German taxpayers hundreds millions of euros. Quick preview of how it works – the person in question (natural or legal) claims to Tax Offices a refund on VAT on a certain product, yet the underlying transaction never took place which means that this person would receive „state money” illegally. In 2012, the search instigated by Frankfurt’s General Prosecutor, lead to the indictment of the accomplices in tax fraud, also the charges of money laundering were raised. The European Anti-fraud Office (OLAF) wanted to take part in these investigation, yet ironically, its participation was dependent on the approval of the State in question and in this particular case the authorization was refused. Europol estimates that in Europe the total loss which stems from VAT-carousel frauds is as high as several billion euros.

The next few months will irrefutably be a time of hardship and toil for Deutsche Bank. At its glory days, the price came up to 100 dollars per stock, now the price over 25 dollars per stocks is rather unseen. It is not only the black PR, that caused all the problems, but also the changes in current credit ratings. Standard & Poor’s, one of the main independent rating agencies, in June downgraded bank’s creditworthiness to BBB+, which is lower than the Lehman Banks’ ratings when it was going bankrupt. The discussion in European media about the problem is rather scarce. What the banking sector needs, is the introduction of rules and laws for handling „future money”, that is derivatives in any guise, as usually they are over-the-counter transactions concluded without transparency nor exterior supervision. It needs to be acknowledged – no bank exists in a void – once Deutsche Bank goes bust, it will have tremendous repercussions on the whole economy market.